Welcome to The ROM Exchange! ROMX is an in-system programmable device that replaces the system ROM’s in your Apple II or II+ computer. It will store up to 15 ROM images, and present them for selection via an on-screen menu system. In addition, the menu system itself (the ROMX firmware) is updateable in-system.

What do we mean by In-System Programmable? This simply means that you can re-program ROMX with your own ROM images without removing the device from your computer, and without need for an external programmer. Uploading of new ROM images is done through either the ROMX boot menu, or by running the ROMX.DISK utility from the ROMX floppy disk image. the firmware image is also upgradeable using the same process.

ROMX firmware v0.963 onwards supports linking of a ROM image with a DOS image loaded into a ROM slot. When a ROM image is linked to a DOS image, DOS will be loaded the instant the ROM is selected! This can be a real time saver.

If you purchase the optional ROMX text ROM bundle, one of 16 text ROMs (fonts) can be selected from the ROMX menu also, or associated with a specific system ROM. See the blog post here for the list of available fonts.

ROMX is preloaded with a number of ROM images including basic diagnostics - the as-shipped selection is shown below: 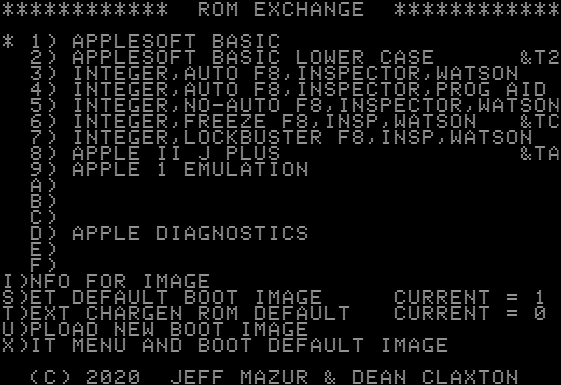 Note that the JTAG header is for production programming of the CPLD only - it's not used to upload ROM images. ROM's are uploaded directly from the computer - BLOAD a 12KB ROM image, run up the menu, and U)PLOAD it to flash memory, where it will now be stored until you decide to overwrite it with another!

Hardware Requirements : ROMX will work in any Apple II but its functionality may be limited by the amount of RAM in the machine. Currently, with pre-release software you get full functionality in machines that have at least 32K of RAM. With less RAM, you can install a pre-configured board into a machine with as little as 4K but you will only get a simplified menu that lets you switch banks. The board can be pre-configured (images loaded, defaults set ,etc.) in another Apple II with 32K or more. When version 1.0 of the firmware is released, the plan is to have a mini-DOS built in, so that images can be directly loaded from disk into the flash using the on-board menu. This will work with as little as 16K of RAM. 4K RAM machines will still be supported with the limited functionality. Firmware upgrades are easily done with a file download from TheROMExchange.com and the Upload Image command in ROMX.